Rodrigo Ventosilla, an activist from Peru and a graduate student at Harvard Kennedy School, died days after being arrested with his spouse at the airport. 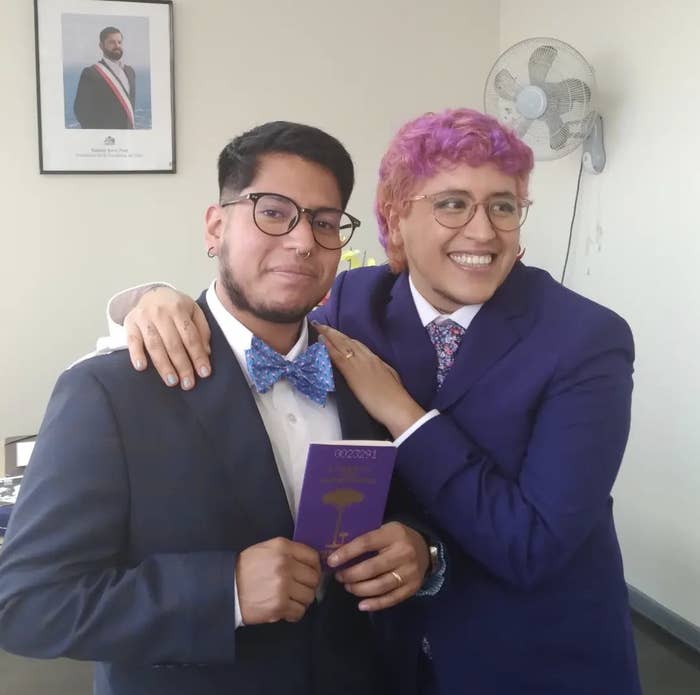 In what family members are calling an "act of racial discrimination and transphobia," a transgender Peruvian man who was in Bali for his honeymoon died after he and his spouse were detained by Indonesian authorities at the airport for alleged drug offenses.

Rodrigo Ventosilla, 32, was an activist from Lima, Peru, and a graduate student at Harvard Kennedy School. He had recently married his partner, Sebastian Marallano, and they traveled to Bali for their honeymoon.

When Ventosilla arrived at the Denpasar airport on Aug. 6, he was detained on suspicion of drug trafficking after authorities found drugs that Ventosilla's family said he was taking for his mental health and had a prescription for. Marallano, who had flown in on an earlier flight, was also detained when he went to help Ventosilla, the family said in a statement.

Diversidades Trans Masculinas, a Peruvian trans advocacy group that Ventosilla founded, said there was an empty cannabis grinder in one of their suitcases, which they did not realize was there.

Ventosilla's family said that while in detention, the couple were "victims of police violence," and alleged that authorities violated their right to legal representation and discriminated against them. Ventosilla died on Aug. 11 after being hospitalized in the ICU for organ failure, the family said.

Bali police denied any wrongdoing and told the South China Morning Post that Ventosilla had a "failure of bodily functions" after taking medication while in custody. It's unclear what substances they were referring to. Bali police did not immediately respond to a request for comment.

His family said they were unable to communicate with Ventosilla during his detention, and lawyers hired by both families were denied access. Indonesian authorities also did not allow them to order an independent autopsy on Ventosilla's body, they said, and they don't know the real cause of his death.

They also accused the Peruvian Consulate in Indonesia of ignoring their repeated requests for help and "neglecting its obligations" to help the couple. The family demanded that the Ministry of Foreign Affairs investigate the consul and his team for failing to take charge of the case from the start of the couple's ordeal.

"The consulate's action was late, negligent and hindered the request for help from the relatives when Rodrigo was still alive," they said.

The statement from Ventosilla's family "raises very serious questions that deserve clear and accurate answers," Harvard Kennedy School Dean Douglas Elmendorf said. "Harvard Kennedy School supports the family’s call for an immediate and thorough investigation and for public release of all relevant information, and the School stands with all of Rodrigo’s friends and colleagues and with the LGBTQ+ community."

Ventosilla's family has asked the Peruvian Ministry of Foreign Affairs to push for an investigation into Indonesian authorities' conduct. But in a statement issued this week, the ministry appeared to side with Indonesian officials' account of the events.

In a news release on Aug. 22, the Ministry of Foreign Affairs denied that Indonesian authorities' actions amounted to discrimination and anti-trans violence. The ministry said that the arrest happened because customs officers found pills with a medical prescription and "objects that contained traces of cannabis, as well as various products made with said substance."

"As is public knowledge, Indonesia maintains a zero-tolerance policy regarding the possession of drugs and their derivative products, for which one of the detained nationals would have committed a serious crime under the strict laws of that country," the ministry said.

It also said that the Peruvian Consulate was in touch with local authorities throughout to ensure that they worked within local law and respected Ventosilla and Marallano's rights.

Gianna Camacho, a spokesperson for Ventosilla's family, told BuzzFeed News that they reject the ministry's statement, calling it an "offense against the families" and "biased" against Sebastian and the families' accounts.

"We demand a process that determines those responsible for the torture, extortion and violation of human rights that Sebastián suffered and that led to the death of Rodrigo," they said.

Marallano has since returned to Lima, the spokesperson said. Ventosilla's body is expected to arrive on Aug. 31.

The deterioration of LGBTQ rights in Indonesia has alarmed activists and human rights organizations. There is no law explicitly prohibiting same-sex relations, and trans people can change their gender on official documents after gender reassignment surgery. But authorities have leaned on other laws to crack down on LGBTQ people in the country. Reports of violence and discrimination against the LGBTQ community in Indonesia are rampant, and local activists have said it could get worse.

Indonesia also has some of the strictest drug laws in the world. Travelers from other countries have been handed the death penalty for drug offenses in the past. Cannabis is considered a Category 1 narcotic, and possession can result in years of imprisonment and hefty fines.

Most prescription medication is allowed into Indonesia, though authorities strongly advise bringing a doctor's letter and the original prescription along with it. International travelers have also been detained in Indonesia for carrying medication without a prescription.