A witness told BuzzFeed News she was making her way through the crowd when "suddenly this wave of panic rushed us." This story contains graphic photos and describes disturbing video. 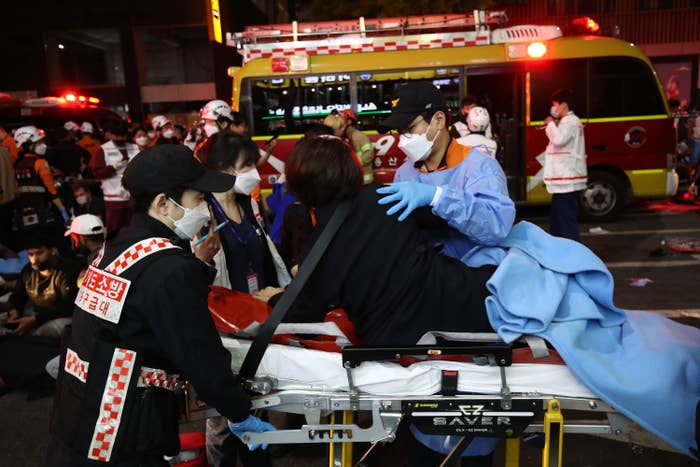 Emergency services transport people injured in the crowd crush in Seoul on Oct. 30, 2022.

At least 146 people were killed and dozens others injured after a large crowd was crushed in a crowd surge during Halloween festivities in downtown Seoul Saturday night.

Videos posted on social media showed people performing chest compressions on others who were lying on the ground as ambulance lights lit up the street. The Associated Press reported that people were crushed to death after the crowd began pushing forward in a narrow alley outside Hamilton Hotel in the capital city's popular Itaewon district. It wasn't immediately clear what caused the crowd to surge.

Choi Seong-beom, chief of Seoul’s Yongsan fire department, said early Sunday that the death toll could still rise and that an unknown number of those injured were in critical condition, according to the AP. Many of the dead were sent to hospitals while the bodies of dozens of others who were killed were being transported to a nearby gym to be identified, Seong-beom said. Most of those killed or injured are in their 20s. 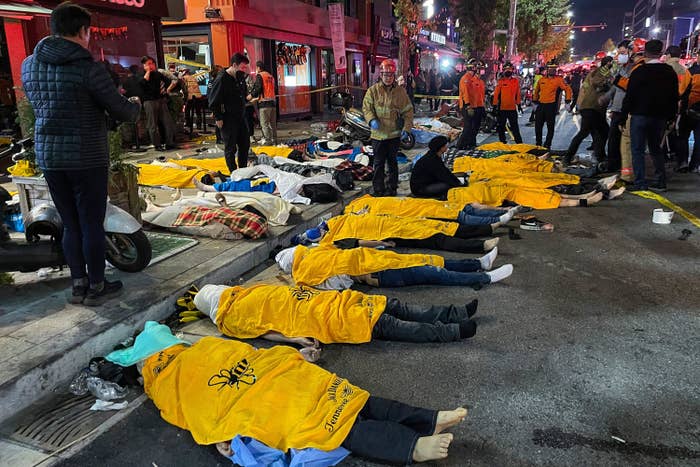 Bodies of people killed in the crowd surge are pictured lying in the street in Seoul's popular nightlife district of Itaewon on Oct. 30, 2022.

A survivor who got stuck in the crush of people told Hankyoreh, a South Korean newspaper, that he waited over an hour to be rescued. "I heard voices asking for help here and there, and I saw people who couldn't breathe," the survivor, identified as Mr. Kim, said.

Washington Post reporter Kelly Kasulis Cho described the scene as chaotic in a series of tweets, saying that as she looked out across the horizon all she could see were "dozens of red ambulance lights flashing."

I am so deeply saddened and shocked. I have a pit in my stomach. Halloween has been one of those rare, beautiful holidays where foreigners shared their culture with Koreans here and there was a great feeling of mutual excitement. This is horrific, tragic, sad.

Janelle Story, 35, told BuzzFeed News she was going on a bar crawl when she came across the crowds in the street. By 8:30 p.m., Story, an American who lives in Seoul, said the area was already full of people. "Even just getting out of the subway station was intimidating," she said via Twitter messages early Sunday. "It took 20 minutes to exit the station."

As she was moving from bar to bar near Hamilton Hotel, she said the crowds were packed tightly together, but nothing at that point seemed to be dangerous.

"Even though I was uncomfortable, no one was 'out of control,'" she said. "We were all just moving very slowly and orderly."

But then around 10:30 p.m., Story said she started to feel more panicked by the situation as she was capturing footage of the scene, which she posted to Twitter.