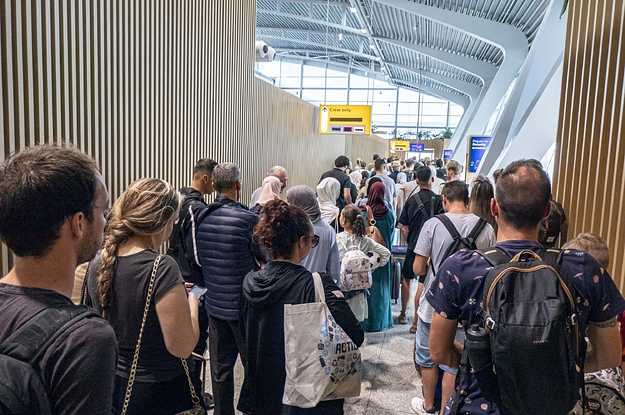 Traveling at US airports will likely remain a challenge in the fall as airlines cut thousands of flights ahead of the holiday season. 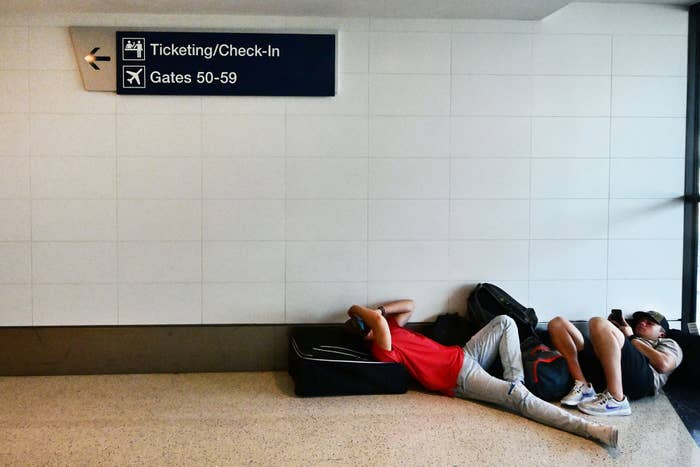 Travelers rest on the ground while waiting for their flights at Los Angeles International Airport on July 1, 2022.

This summer’s flight headaches, many of them caused by extreme weather, continue to wreak havoc at airports across the US and beyond, with 11,337 delays and 2,077 cancellations reported so far. And it's not likely to get much better any time soon.

The hardest-hit airports on Monday, which saw the bulk of the cancellations, were Newark Liberty International, Dallas–Fort Worth International, and LaGuardia, according to FlightAware. The delays and cancellations at those airports were due to storms and staffing issues.

The National Weather Service said Dallas–Fort Worth Airport saw record rainfall between Sunday and Monday with 9.19 inches of rain, making it the second-wettest 24-hour period.

Travelers at Newark Liberty International reported being stuck for nearly nine hours on the tarmac, in some cases being asked to disembark the plane and later get back on, only to be ultimately told the flight was canceled because the crew had clocked out. 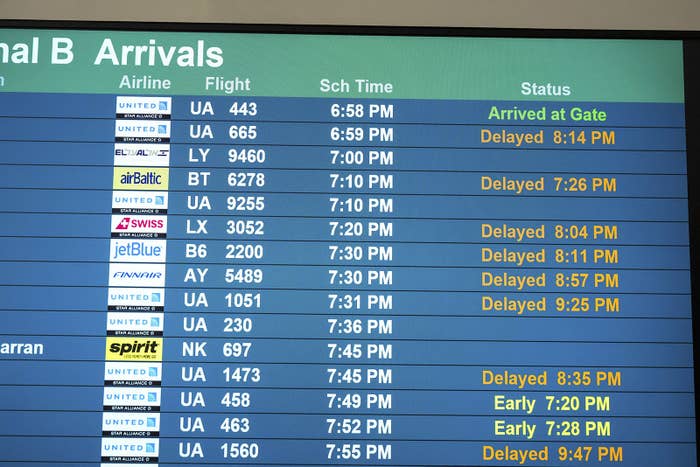 At Chicago O’Hare International, which saw 30 cancellations and 274 delays, Austin Frerick, a food and agriculture researcher, said on Twitter that he finally got home after 36 hours of delays and three canceled flights.

Pulitzer Prize–winning reporter Nikole Hannah-Jones said her flight from Ronald Reagan Washington National Airport was boarded and disembarked twice. Then her flight was boarded again only to be told just before takeoff that the crew had timed out and the flight was canceled.

Airlines hoping to reduce the number of future canceled or delayed flights are cutting thousands of flights in the fall and holiday season, Condé Nast Traveler reported. As a result, travelers can expect higher fares, fuller planes, and less rebooking flexibility if flights get canceled due to weather. 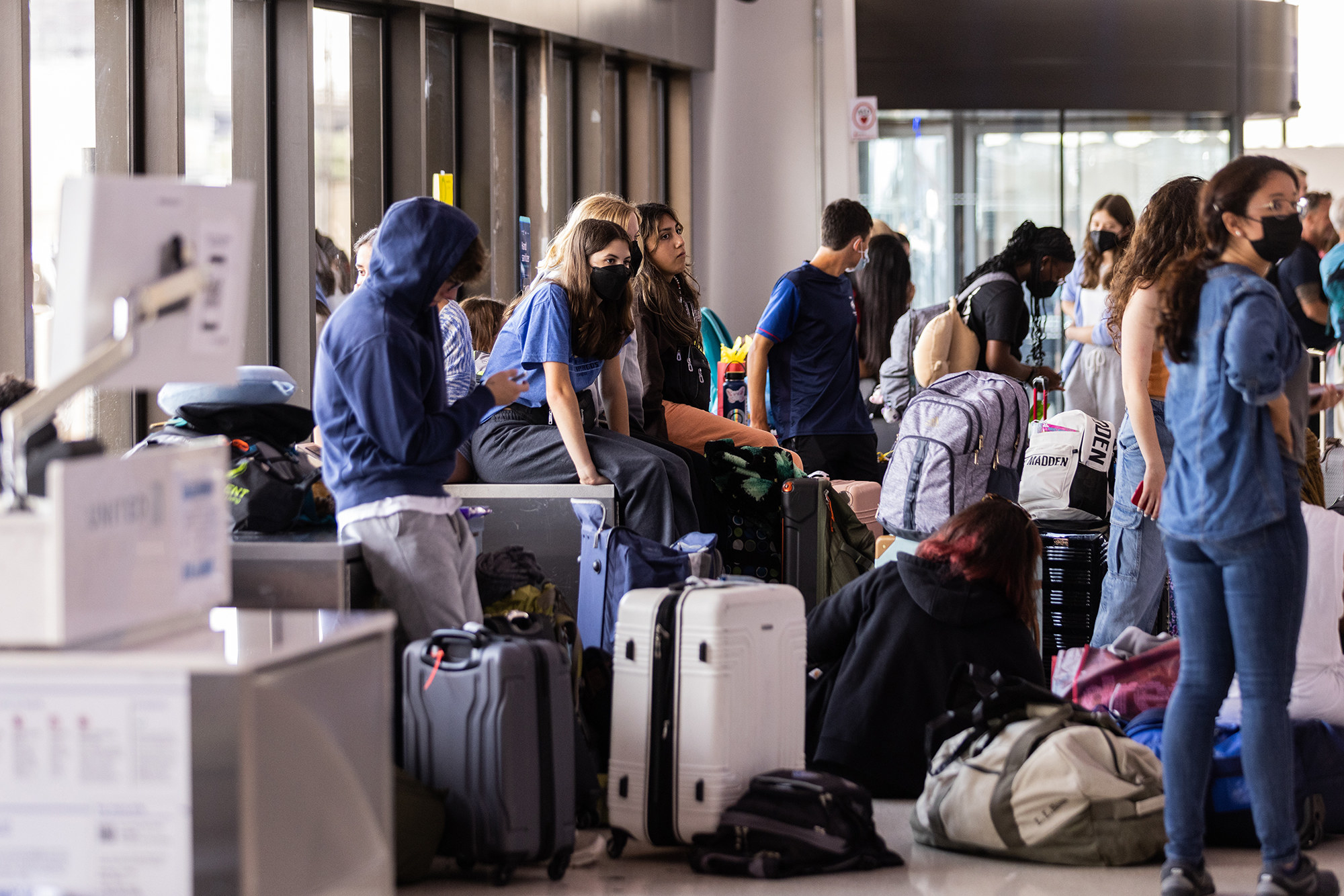 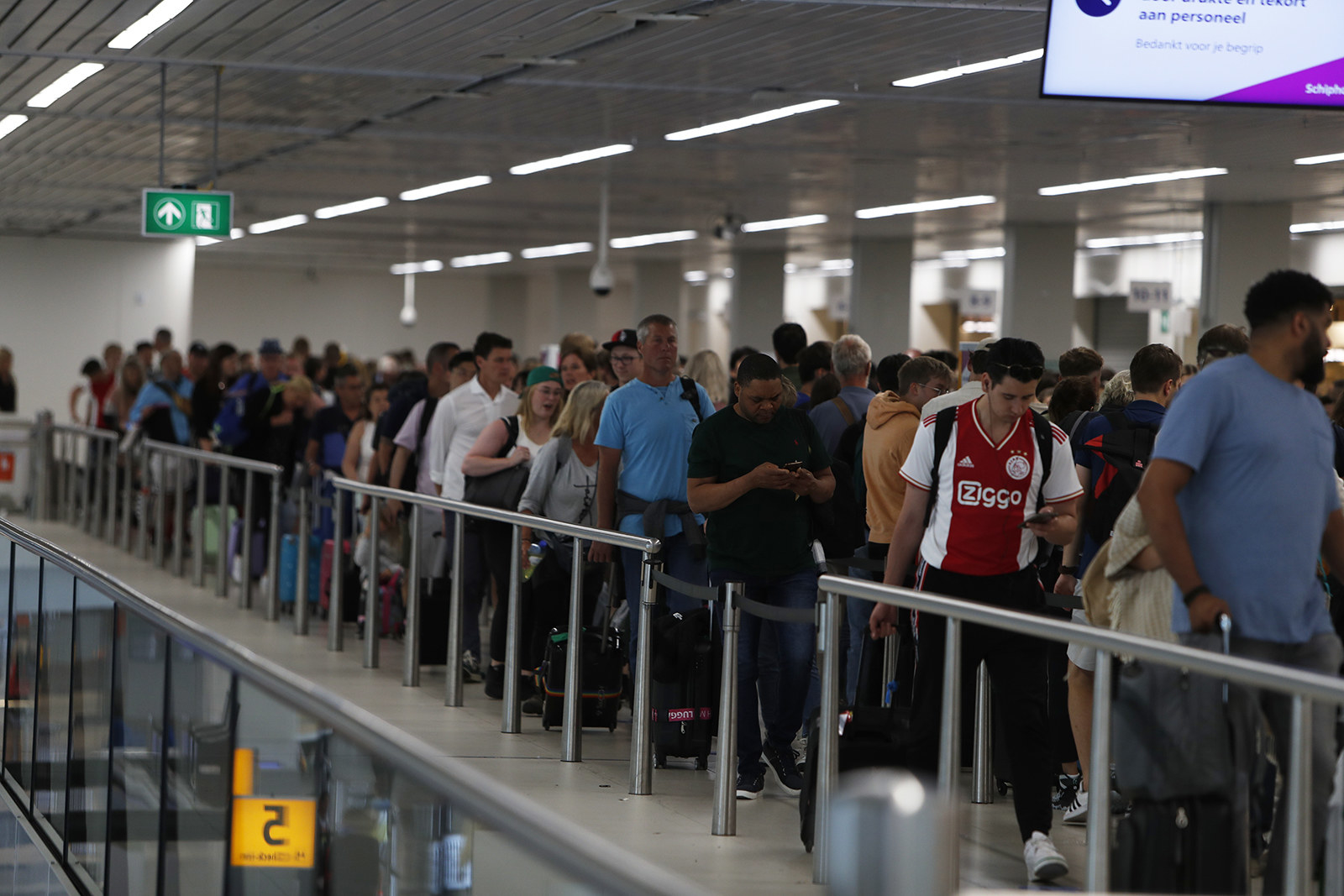 Passengers line up in Schiphol Airport while mass staff shortages continue with flight disruptions, including delays and cancellations after the strike in Amsterdam on July 27, 2022. 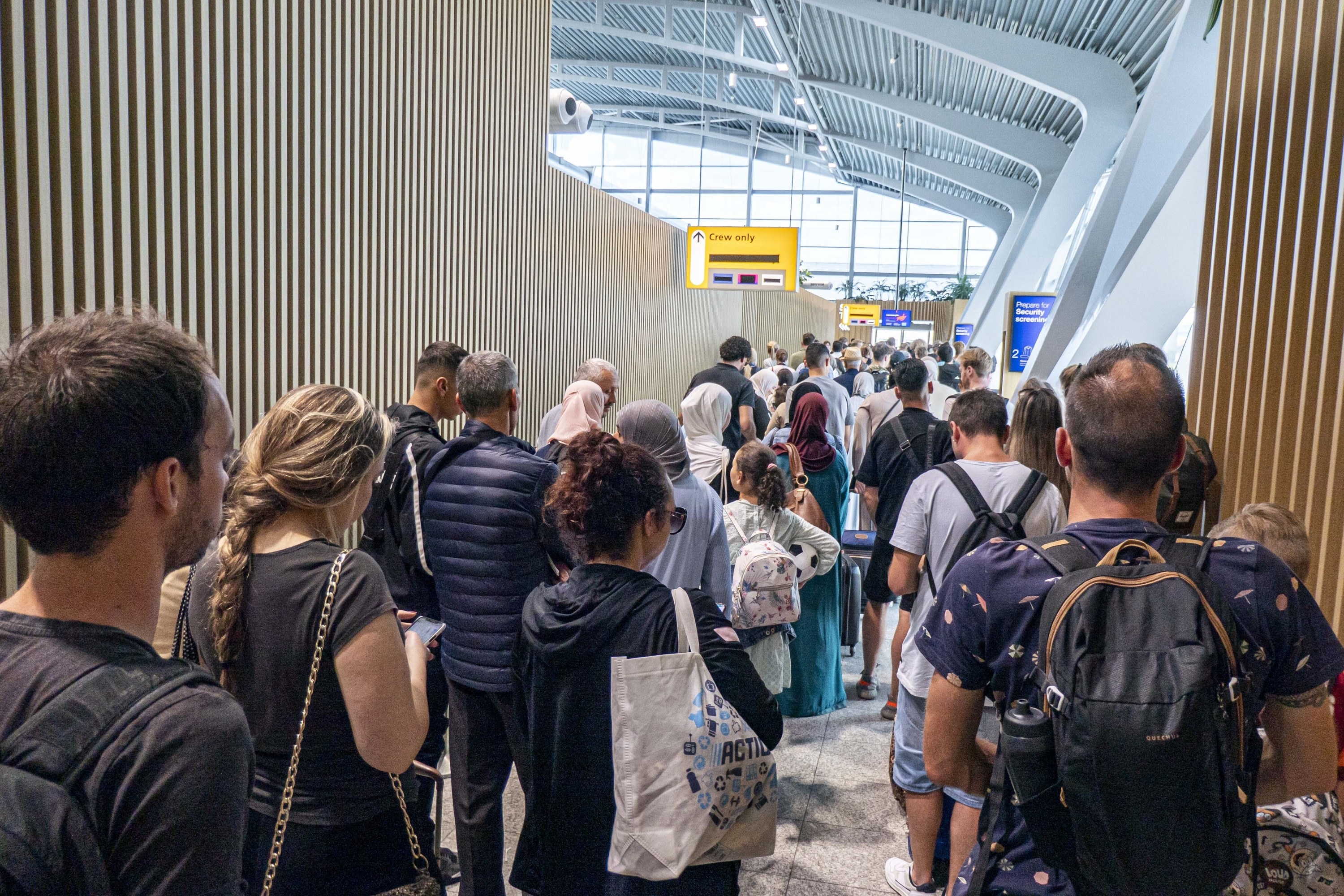 Long lines of passengers waiting to pass in the security check at Eindhoven Airport in the Netherlands on July 14, 2022. 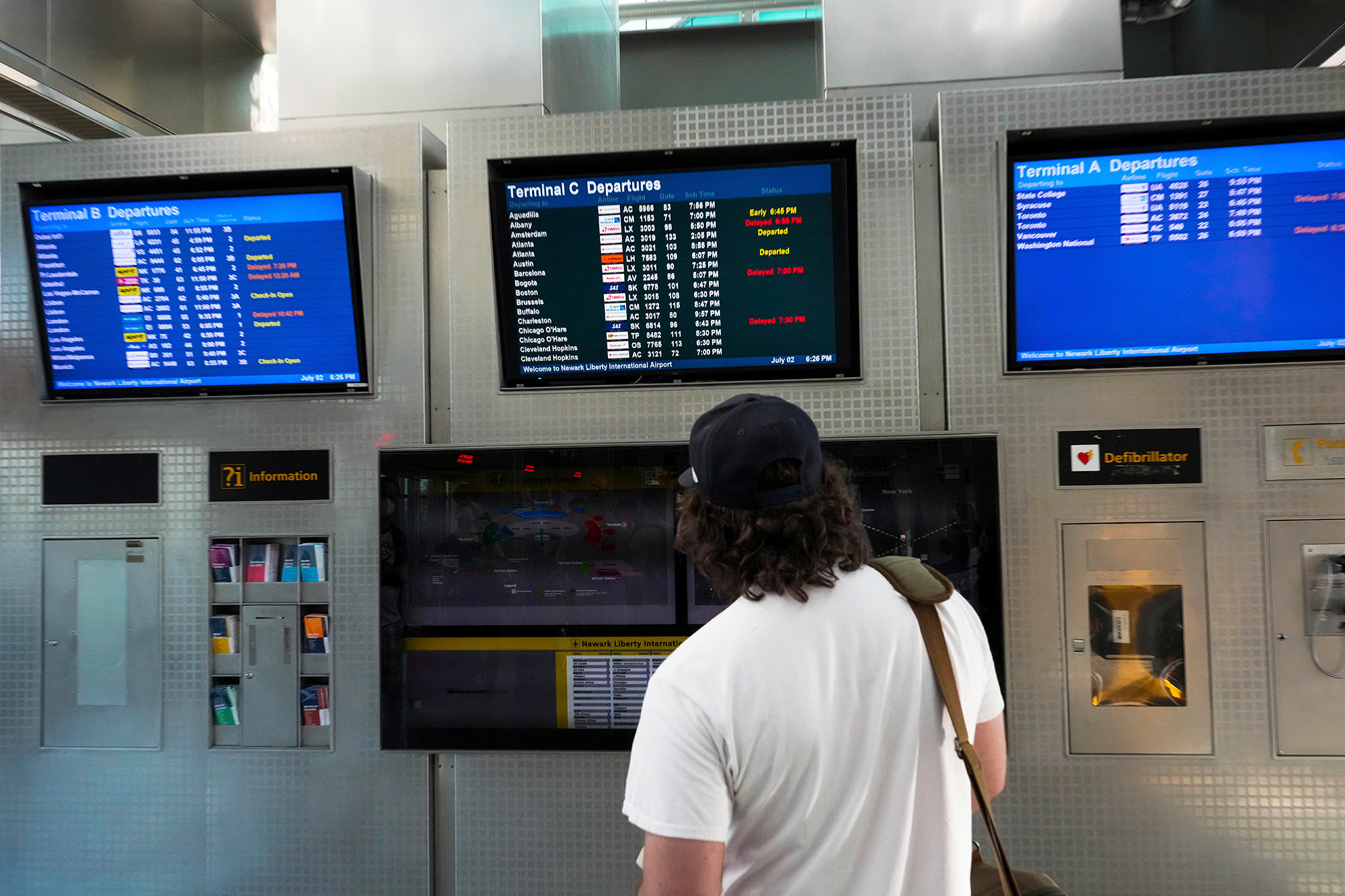 Travelers arrive at Newark Liberty International Airport in Newark, New Jersey, as hundreds of flights were canceled across the US ahead of July 4th weekend, on July 3, 2022. 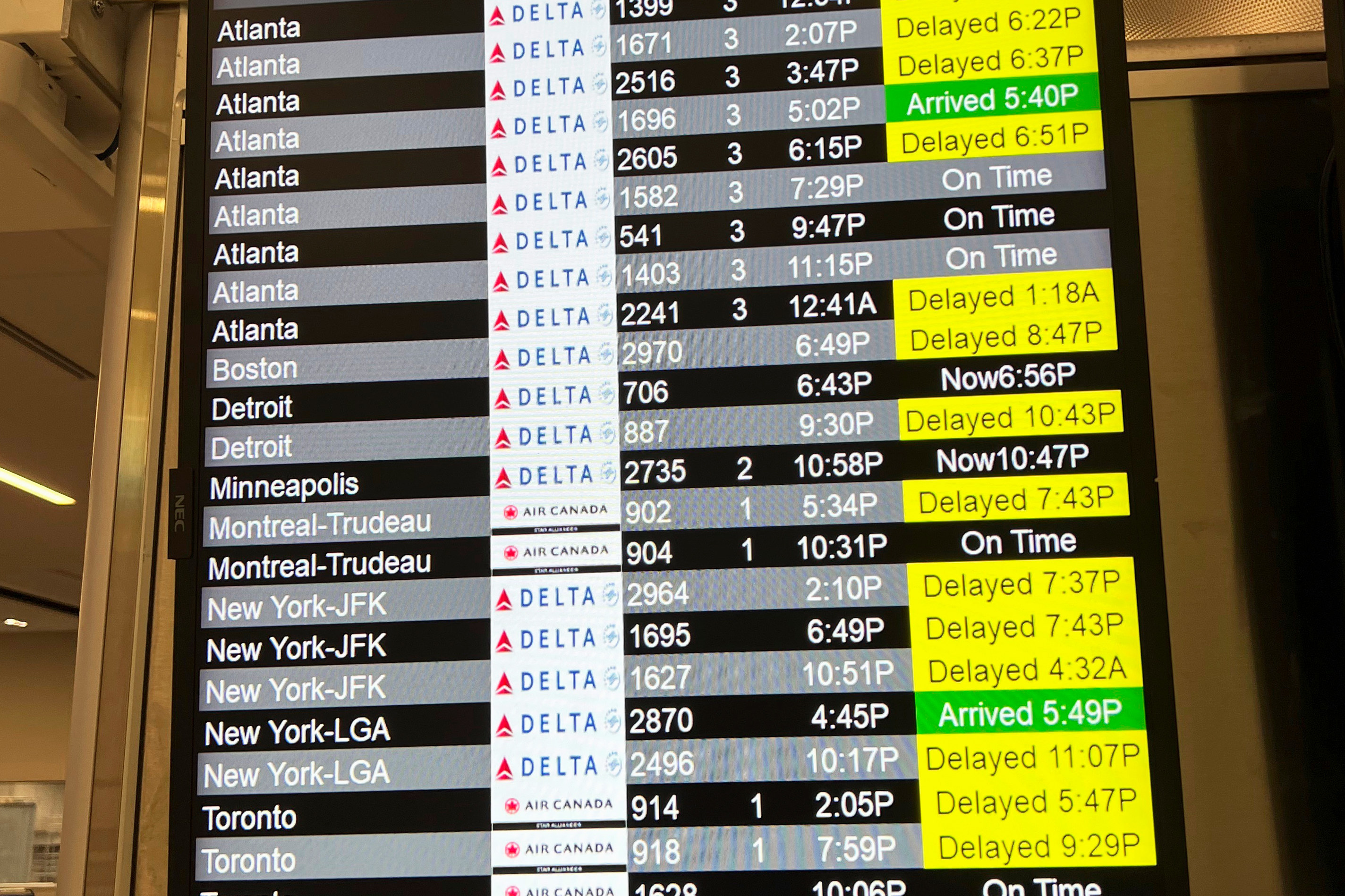